Because of Her, we can!

Wearing red, black and yellow, proudly carrying banners highlighting this year’s theme ‘because of her, we can’ young and old joined in.

Kelvin Brown held a smoking ceremony as people arrived at the park and afterwards Aunt Beryl Hepi said a Welcome to Country.

Led by Josh Blair, young dancers then entertained the crowd with a number of traditional dances and songs.

Later on in the day chairperson of the Inverell/Tingha NAIDOC Committee Lyn Lackay gathered everyone around for this year’s awards.

The first award presented on Friday was Elder of the Year. Elaine Williams and Elizabeth Connors both received the honour.

Josh Blair was awarded the 2018 education and training award.

The commitment and dedication towards Aboriginal services (Indigenous) award was presented to Kelvin Brown.

Michele Jedlicka was awarded the commitment and dedication towards Aboriginal services (non-Indigenous) award.

Volunteer of the year was presented to Owen Duncan and the carers award went to Belinda Munn.

Finally, the prestigious Aunt May Yarrowick award was presented to a very surprised James Sheather.

Upon accepting the award he said there were a lot of other deserving people in the community.

“I just like helping my friends, family and community. I have been brought up by a very strong mother and strong grandparents as well I am very proud of that,” he said.

“I am very proud of my father too and I know the theme is ‘because of her, we can’ but while Mum was studying teaching our Dad had to step up and be our Mum so it’s because of him, I can too,” he laughed.

James said he was extremely happy with the turnout to this week’s NAIDOC Week events.

“We’ve had the most turn up this year and like Mum said it’s growing every year. I am a proud Aboriginal man and I am proud to be part of this community.” 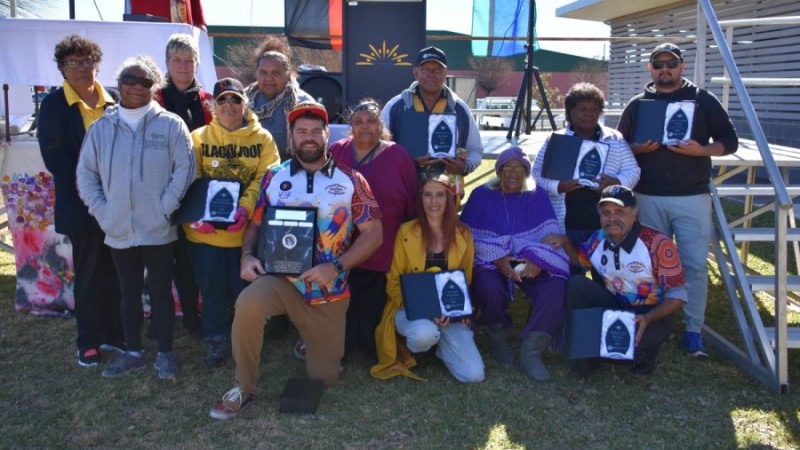