Armajun, the Aboriginal health service, held a session to inoculate adults and children against the strands of flu experts expect in the coming months.

There was a steady stream of people at the mobile clinic on Lang Street on Wednesday. Visitors got the reassurance of the flu jab plus the fun of convivial companionship at a barbecue.

About thirty people were expected to be vaccinated over the day and that response seemed to please the organisers.

There has been a drive to immunise Aboriginal people, with the message that new vaccinations are needed each year because the virus morphs into new forms and last year’s vaccine won’t beat this year’s flu.

Aboriginal people are more prone to getting flu, according to the state’s department of health. It isn’t clear if this is because they were more vulnerable to diseases brought in by white people and that legacy continues, or whether there are other factors at work.

Now is the time to get the vaccination because the first three months of winter are the time when the risk of getting flu is highest.

Either way, Armajun emphasises that flu vaccination is a good thing to get. Anyone who missed the session on Wednesday can still go to the clinic on Lang Street to get he protective jab.

Poorer health isn’t just a factor with Aboriginal people but study after study shows that people of all skin colours and backgrounds in country towns tend to be worse off.

There are a vatierty of reasons: doctors prefer to settle in the big cities so efforts have to be made to attract them to rural towns, including Glen Innes.

Rich areas tend to have better health because richer people can afford better health care and tend to eat healthier food. Some studies have indicated that they are more aware of health issues.

The Heart Foundation said that rates of obesity and heart disease were higher in country towns: “Australians living in regional/remote locations and those in the highest disadvantaged group were significantly more likely to be overweight/obese.

It also added that “having English as the main language spoken at home and being employed also significantly increased the likelihood of being overweight/obese.”

There have recently been a number of initiatives to try to redress this city/country imbalance in Glen Innes.

This week’s vaccination service was provided by a mobile clinic.

There has also been a mobile breast-screening clinic in the town and also a mobile clinic for general children’s health check-ups.

(Author: Steve Evans. First appeared in Glen Innes Examiner on the 16th May 2018) 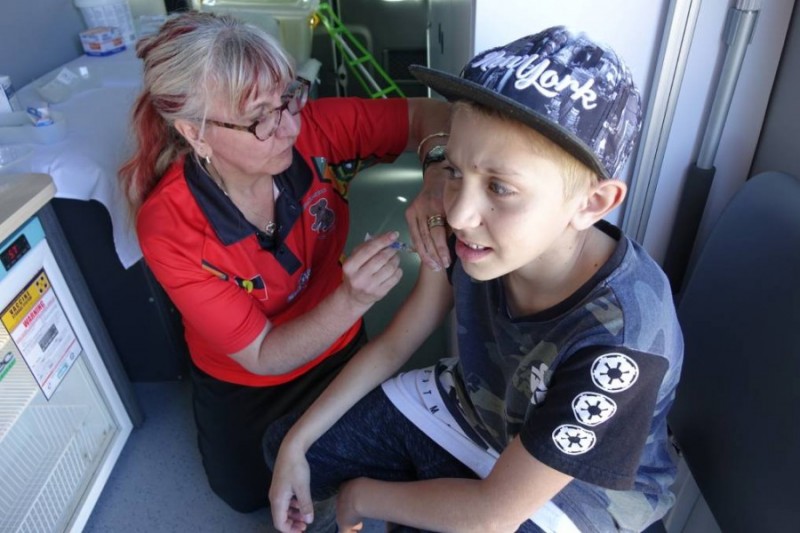